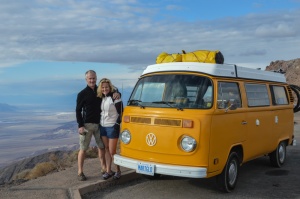 After both riding the so-called “train” for 20+ years (you know the one – get married in your 20’s cuz that’s what ya do, build your career, buy a home, fill it with some kids, and then realize that you are empty inside), they each disembarked at Divorce Station.

Their paths crossed in the most unusual way, and were friends at first.  With way too many common interests, passions, hobbies and dreams to ignore – that friendship quickly turned into an incredible romance.

Early on in their relationship, Jeff suggested they buy a VW hippy bus together. Debbie was at first a bit apprehensive, however Jeff said, “You only live once”.  Those words were the catalyst for a 6-month search for a late 1970’s VW Westfalia campervan.  In February 2013, they found their dream bus in Riverside, California.  It was love at first sight.  Debbie & Jeff are the second owners of an adorable 1976 rust-free bus named,  ‘Marigold’.   During the summer months she is based in Toronto, Canada, and spends her winters in the US Southwest.  During the winter of 2013-14, Marigold visited San Francisco, Yosemite, the Eastern Sierra Nevadas, Big Sur, Los Angeles, Death Valley, Zion, the Grand Canyon, Vegas and Sedona. In January 2015, Debbie and Jeff completed an epic 4,000 km, 16-day roadtrip in Baja California from San Diego to Todos Santos, Mexico and back.

This blog is about them (us). Dating in our 40’s, having 5 kids, a VW hippy bus, and a crazy need for adventure – especially with our mountain bikes. We hope our stories will inspire others to passionately pursue their simple pleasures, and expand their realm of possibilities. 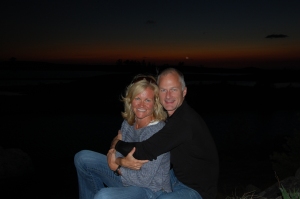 6 thoughts on “About Us”