Before leaving Guerrero, we went to Scammon’s Lagoon which is the birthing place of California Grey whales during their migration south from Alaska to Baja.  The pregnant whales come into this shallow lagoon with a higher salinity to give birth between December and April each year.  The shallow waters protect the calves from predators such as the killer whales who wait just outside the lagoon. We had the opportunity to see several mom’s and their calves.  So incredible!  These 1,000 lb. babies work hard to keep up with their mom and seem to draft their large bellies.  Since it was early in the birthing season, the mom’s were VERY protective of their babies and did not allow us to touch them.  They did however come close and dove directly underneath our panga. 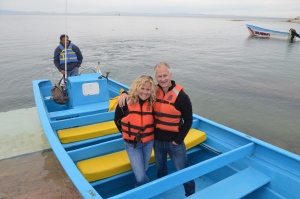 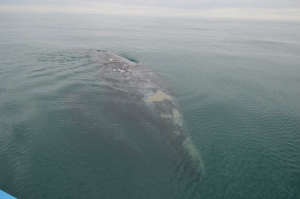 On our way back from the lagoon, there was a coyote on the beach.  And a little further down, a dead baby California Grey whale, apparently attacked by a killer whale or shark. Mother Nature in its unobstructed raw state – incredible. 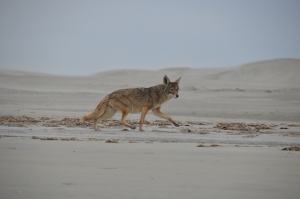 Adjacent to the Lagoon is one of the worlds largest producers of industrial and table salt.  The ESSA company has 200+ lagoons which they pump full of water, then let evaporate by the sun.  They produce 7 million tons of salt each year.  As we headed out to Scammon’s, we saw this impressive manufacturing operation. Since the salt production is done is shallow lagoons, barges must take the salt to an island with a deep water port which is 8 hours away.

We reflected with puzzlement on how this highly protected area for the whales can coexist with a major world manufacturer of salt.  But apparently they do….

Yesterday we departed Guerrero Negro at 6:00 am and set out to drive as far as we could during daylight hours.  We knew Marigold’s engine wasn’t happy. So our thought was to push her as far as we could, and hopefully make it to Ensenada – about 600 km away.

You see, our particular engine was only installed in the US and Canadian campervans. The Mexican version of our bus had the Beetle engine installed, not our T4 engine.  So our best bet was to get to the border ASAP, and at least be within towing range of the border.  Parts would be near impossible to get here in Mexico.

As we passed through Catavina, the battery light came on.  It was flickering to the same frequency as the engine sounds.  Jeff immediately thought it was the alternator, and was worried about the ball bearings and how long we had before things got worse.

At our lunch stop, Jeff read on TheSamba.com that we can run about 200 miles with a faulty alternator once the red light appears. Fingers were crossed.

Nine hours later (and 600 km travelled), we pulled into a stunning campsite (Campo #5) atop a cliff overlooking the Pacific near La Bufadoro.  We were just south of the large city of Ensenada.  The sun was setting and it was spectacular to see from such a great height.  But Marigold was struggling.  Her battery was nearly dead from the broken alternator.  So Debbie suggested we head back into Ensenada where there are people to help us should the bus stop running.  Otherwise we would be all alone…. 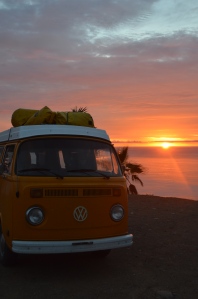 About halfway between La Bufadoro and Ensenada, the bus completely konked out at a stop sign. We were fortunate to be in an English-speaking beachside community.

The guy behind us immediately got out and asked if we needed help.  He told us his friend is a VW mechanic (every single Mexican seems to be one or knows one….) and off Jeff went to meet his mechanic friend.  Half an hour later, they returned and we limped the bus to their home not far away.

And we are parked in the driveway of Gonzales (aka ‘Gonzo’) and Naomi in a gated beach camp community.  He is a mechanic and a Pastor.  She is a Missionary originally from LA.  They are devoting their life to helping the elderly, and especially those living alone or abandoned by their families.  They are renovating their home in order for 5 elderly to live with them full-time.  What a deep commitment to serving others.

Gonzo then immediately went to work pulling out the alternator.

As suspected, the ball bearings were seized and totally shot.  They had disintegrated and damaged the housing.  Metal shards and shavings were everywhere.

By now it was late, and we were pretty exhausted.  So we headed to bed wondering how we were going to get home the next day, so that Debbie could catch her flight.

We counted our blessings that the bus took us 600 km with a broken alternator, that we didn’t break down in the desert and that we were safe and sound in Naomi and Gonzo’s driveway overlooking the Pacific.