Welcome to our next bus adventure!

This time we’re with three of our kids, plus our beloved Marigold PLUS a second VW Westfalia that we are renting.  A double-bus adventure begins.

Post Baja, we stored Marigold in Irvine, California for a few weeks until our return on March 12th. We decided to take the kids on a camping adventure in SoCal for March Break.

Two buses hit the road from Costa Mesa with Jalama Beach (2 hours north of Santa Barbara) as our first destination. En route, we decided to check out famous Venice Beach. We strolled along the boardwalk, people watched, saw the famous Muscle Beach and then walked along the sand. It was 33 degrees and gosh was it ever busy! Apparently it was the nicest day of the year so far – by a large margin.

When Debbie returned to the busses, there was a whole lotta activity going on with the car parked right next to us. Cowboy hats on the roof of their car, guitars on the ground and white cowboy boots laying around. 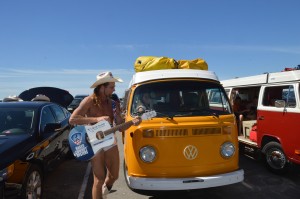 Then Debbie noticed the writing on the hat. It clearly stated, “Naked Cowboy”. This immediately took her back more than 10 years ago when she first saw the iconic Times Square ‘Naked Cowboy’. She first thought this was an imposter until she made eye contact with the 6’5” blonde, blue eyed, pony-tailed, ADONIS and realized he was the real deal. 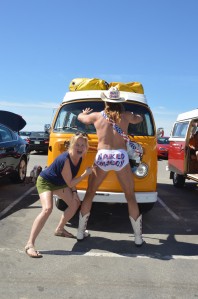 Image our good fortune. Now imagine the look on our kid’s faces…..

Robert – aka The Naked Cowboy – got into costume. Yep – ripped his clothes off down to his corporate sponsored ‘Fruit of the Loom’ tighty whities. Then put on his gigalo-white boots, slung his guitar over his bare chest with it strategically placed to give the illusion of nakedness, and put on his white cowboy hat. He was ready for action.

While he is synonymous with Times Square, he shared with us that his real start was right here at Venice Beach where he used to model.

So here he was, on vacay, back where it all began.  And with his wife in a scantily-clad bikini alongside.  She is apparently the Naked Cowgirl.

We had a good chat with him as he was getting ready to ‘perform’.   He was super curious about our two busses and our story. Funny – while we were away from the busses and cruising the boardwalk, he was observing the plethora of people taking photos of Marigold and our rental Ruby.

We said our goodbyes, but not before we got a bunch of autographed photos, and learned about his new venture, Naked Cowboy Oysters.

Then onwards to Jalama Beach, where we are spending 3 glorious nights camping directly on the beach.

And as the Naked Cowboy told us today as we parted ways, “Each day keeps getting better”.

Thanks, Robert. That is now our trip mantra, and words we will cherish forever….

Getting the hang of driving standard in Marigold on Pismo Beach.

Dreams really do come true.  Trust me.  They do.

It all started nearly two years ago when planning a March Break trip with my kids.  They wanted to see the California Coast.  I wanted to experience it in a vintage VW Westfalia Campervan.  You see, I had the experience of one of these adorable iconic buses in my past.  It was my dream to have my very own bus someday, although I was having difficulties seeing how this was possible.  I was a single mom at the time, didn’t know how to drive standard, was not sure spending money on a 30+ year old vehicle made fiscal sense and I knew very little about car mechanics.  So I went ahead and booked a trip to Cali, and rented a VW bus from VW Surfari in LA.  At least I could fulfill part of my dream.

Fast forward 12 months.  I meet an incredible man, who longed to have a vintage VW, loves tinkering/mechanical stuff, and suggested we buy a bus together.  I was gobsmacked.  Could this be real?  We were just dating.  I said yes, after he said “Look, if we don’t work out as a couple, either you buy me out, I buy you out or we sell the bus.  It’s not complicated”.  True, very true.  Buying a bus with Jeff, not only addressed my concerns about buying a bus alone, BUT most importantly I got to share this experience with a man I was falling deeply in love with. The hunt was on……starting August 2012. 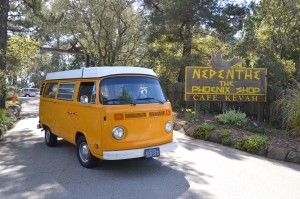 Marigold at Nepenthe. The famous hippy joint known for their burgers, and views of Big Sur.

During the next five months, we looked and looked and looked.  In fact we looked every single day in ALL the classifieds for a VW hippy bus.  We kept changing our needs and switching direction, as we became more knowledgeable.  And we were getting highly discouraged during the search.  Part of us wanted a Split Window (pre-1967 uber-cool, pretty bus – often called a ‘Splitty’),  but friends advised us that a Baywindow bus (1968 – 1979) would be best.  We were ‘split’ between these 2 very different campervans.

In late January of this year, we had an ‘AH-HA’ moment.  We were desperately searching for our dream bus.  And so far this was getting us no where…..fast.  So we switched our strategy.

Rather than us finding the bus, we decided the bus would find us.

Quickly, a list of must-haves was created – our dream wish list.  And guess what?  Within days of this shift, an ad for a bus appeared that met ALL of our needs.

Within 5 minutes of the ad being posted on TheSamba.com, we called the owner.  We were the first to inquire.  With a mere $100 deposit, the seller kindly held the bus for us, despite numerous other interested purchasers.  We made travel arrangements and jumped on a plane as soon as we could.  A day trip from Toronto to LA to check out the bus at SAB Imports happened on February 5, 2013.  It was love at first sight.  Later that day,  Marigold officially became part of our family.

What was so cool about all of this is that March Break was about a month away.  And the bus we bought was in LA.  Imagine that!  My rental bus was quickly cancelled (thanks to Dianne Staggs at VW Surfari in LA for reimbursing me the deposit!).  We would use Marigold instead!  Imagine….our very own bus travelling Highway 1 on her maiden voyage. Another cool thing was that Marigold needed her pop top repainted, and a new tent canvas.  Plus some sway bars installed.  We had all this work done before our trip.  Thanks to Josh and Luis at SAB Imports in Riverside,CA for all of your help and safely storing our bus.

Sunny blue skies, a happy bus purring down Hwy 1, and a memorable once-in-a-lifetime adventure ensued. More than 1,000 magical miles were driven in Marigold.   We made our way from LA to Pismo Beach, drove Marigold on the only beach in California that permits vehicles on the sand, camped at Kirk Creek Campground in Big Sur, ate at Nepenthe, visited Santa Cruz, and then did a day trip to San Francisco.  Marigold even drove down Lombard Street!  We crossed the Golden Gate Bridge and drove to the Marin Headlands.  Breathtaking.  Then en route southbound we camped directly on the beach at Jalama Beach Campground near Lompoc.  The trip was wrapped up with a night in Hollywood.  Whew!

We are now back home and decompressing from this unbelievable trip.

Marigold will now be shipped back to Toronto after spending 37 years in sunny southern California.  I have a contact at VW Canada who put us in touch with Pacific VW in LA.  Marigold will be in good hands being shipped back through several VW dealerships.  We are forever indebted to John White (VW Canada) and Steve Baldassano of Pacific VW in Hawthorne, CA.  We were treated like royalty when we pulled up to Pacific VW.  Steve was one helluva classy guy who seemed more excited about the bus than us!  They arranged shipping for us.  And even shuttled us to LAX after we dropped off Marigold (thanks, Carlos!).  Amazing.

Pacific VW, getting ready to ship Marigold to her new home.

There are too many stories to share about the people we met, the places we visited, the experiences we had together during our Cali Coast road trip.  One memory that stands out is the country bumpkin/red neck at a remote gas station who gave my kids each a dollar (which was likely a ton-o-cash for him)  and said “Here’s a dollar, kids. Welcome to California”.  He said he had everything he needed and wanted in life.  It nearly brought tears to my eyes, as he looked as though he could be living off the streets in NYC.

Marigold is like a having puppy dog.  She attracts people from all walks of life, garners smiles & peace signs, and endless stories. Everyone wanted to talk with us about their VW Campervan memories.  We can assure you many of these people wouldn’t have given us a second glance, had we not pulled up in Marigold.  From dirty hippies, to young children to the old grizzled man with a ‘Welcome’ buck at the gas station.  We made many friends.

What I learned most from this trip is the power of clear intentions.  And dreams.  I am still beside myself in disbelief that I co-own a bus, with an amazing guy, and we got to vacation with her in one of my favourite places on Earth. And that soon she will be in Toronto ready for more adventures with our 5 kids!

Dream big. Be VERY clear about your intentions.  And then be patient.  Things in life don’t always work out on your time.  But they will work out. If, and only if, you believe.  Don’t get discouraged.  Keep dreaming.

Dreams really do come true.  If you believe.  And if you let them………..